You are in New Orleans for 48 hours. This is where you will eat. Say hey hey on twitter » @skinny
My experience of New Orleans is that it's a city of too much; too much booze-soaked music, too much rich food, too much humidity, too much sorrow. It's a city very much in the South but with an identity unlike anywhere else. I've never been in a city inside the United States that felt so little a part of it. It's a mixture of the elegance of Europe with the broken infrastructure of some communist backwater. Moss-draped boulevards lined with ornate mansions have potholes deep enough to lose a tire. Get there quick before sand and sea swallow it whole.

"The other white meat" may be most denigrating description of pork ever. It boggles the mind that such obfuscation and chicanery was used to sell the most versatile and succulent of meats. Thankfully, among the gourmets, gourmands, and gluttons the sweet blob of ... more → 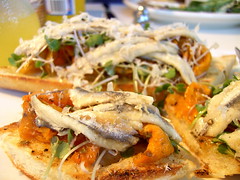 The bovine in profile on the sign outside doesn't not belie steaks within, but instead the cultured bounty of cows' udders. Tucked away on a small strip of shops and restraunts on pryatania St. James Cheese Company provides a bounty of choice for those residents ... more → 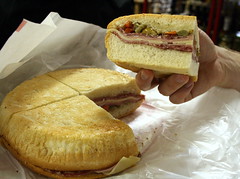 This small grocery faces the French Market and served the farmers who long ago staffed its vegetable stalls. The hearty creation of Central Grocery, the muffaletta sandwich, is a large round loaf split in half and layered with Genoa salami, mortadella, ham, provolone ... more → 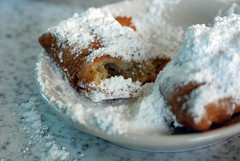 Cafe Du Monde is a well-oiled machine where vats of chicory coffee are made in filters the size lampshades and beignets come out of the kitchen in a fluffy powdered sugar torrent. An army of swiftly-moving, petite, middle-aged Vietnamese ladies will ensure that ... more → 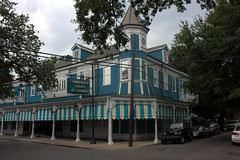 The citizens of New Orleans are absolutely gaga for parades. So strong is their proclivity towards processions you might just find yourself invited to join a kerchief waiving one in the middle of brunch as jazz trio marks the beat. Such is the scene at Commanders ... more → 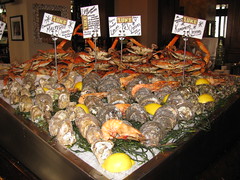 Luke is by far the least wanky restaurant inside a Hilton Hotel I've ever been to. Prepared with a notable Louisiana twist, this is the French brasserie food we all imagined we'd be eating on our semester abroad in Paris that never happened due to reality and meager ... more → 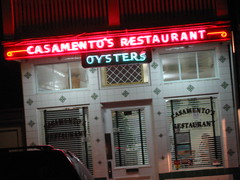 Upon walking through the door you would be forgiven for momentarily thinking you had entered a clean, well-lit, turn-of-the-century subway station. Really this panorama of floor to ceiling vintage tile is a temple to the gulf oyster. Order at least a dozen raw. ... more →